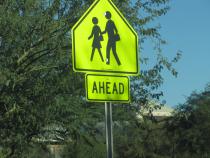 Recess- a time in school that many of us looked forward to. It was a time to play with friends, run around and use our outside voices, but for many kids today recess is no longer fun and games. That is a problem one organization is trying to fix.

The playground at Loma Linda Elementary School in central Phoenix is nothing out of the ordinary. Sixth graders are splitting their time between soccer, volleyball and today's favorite, four square. However, two years ago if you would have told Principal Stephanie De Mar this was her school's playgroud, she would have never believed you.

“We had over 200 office referrals just from recess lunch playground," De Mar said.

Many students were afraid to go to lunch for fear of being bullied. There was so much conflict at recess it would pour over into classroom time.

“I had an opportunity to see Playworks at another school, and my assistant principal and I were like, 'We have to make this happen!'" De Mar said.

Playworks is a program that is currently in 11 valley schools and growing. Chuck Warshaver is the executive director of Playworks Arizona.

“Playworks' overall plan is to transform the school climate through play at recess," Warshaver explained.

How it works is simple. Each school has one Playworks coach that oversees recess for every grade. The coaches' main focus it to make recess an enjoyable time to socialize and be active. Playworks even provides leadership and after school programs that otherwise would not be available.

"The culture will shift within weeks of us coming in," Warshaver said.

The program is working so well for Loma Linda that those 200 office referrals decreased to only four last year.

“It’s just been that whole shift, and it’s just more focus of respecting each other, working together collaboratively," De Mar said.

A survey of teachers last year found 92 percent reported a decrease in bullying over recess, and even more, 94 percent, reported an increase in kids participation in academic activities.

"Our main focus is to teach the kids how to play (and) increase class time, because if there’s no issues at the playground the kids will transition much easier into class," Warshaver said.

Studies show that from a young age, how children interact and socialize on the playground provides the framework for their development.

"I am the director currently of the child study lab which is a preschool here in the psycology department at Arizona State University," said Anne Kupfer.

Kupfer has studied the development of children's socioemotional skills for 15 years.

"The biggest predictor of how a child is going to do later on is their self-regulation or their social skills. That’s going to determine, and here’s the beauty of it, not just how they do socially but academically," Kupfer said.

She supports programs like Playworks but has one problem with it.

"I find it a little odd that we need outside agencies to come in to our school systems to provide the services that we should be providing in our schools," said Kupfer.

However, the ASU psycologist is grateful that schools are doing something, and her message is clear, how children learn is through play.

This story comes to us through a partnership between KJZZ and the Walter Cronkite School of Journalism at Arizona State University.